Why use GEF over PEDA?

PEDA is a fantastic tool that provides similar commands to make the exploitation development process smoother.

However, PEDA suffers from a major drawbacks, which the code is too fundamentally linked to Intel architectures (x86-32 and x86-64). On the other hand, GEF not only supports all the architecture supported by GDB (currently x86, ARM, AARCH64, MIPS, PowerPC, SPARC) but is designed to integrate new architectures very easily as well!

Also, PEDA development has been quite idle for a few years now, and many new interesting features a debugger can provide simply do not exist.

GDB was introduced with its Python support early 2011 with the release of GDB 7. A (very) long way has gone since and the Python API has been massively improved, and GEF is taking advantage of them to provide the coolest features with as little performance impact as possible.

Therefore, it is highly recommended to run GEF with the latest version of GDB. However, all functions should work on a GDB 7.7 and up. If not, send a bug report and provide as much details as possible.

If you are running an obsolete version, GEF will show a error and message and exit. You can still use GDB the normal way.

Some pre-compiled static binaries for both recent GDB and GDBServer can be downloaded from the gdb-static repository.

Note: although some Ubuntu versions are marked as version 7.7 they are actually compiled with some missing features that will make GEF complain of an error. Before lodging a bug report, make sure to update your GDB (via APT is fine), or better install gdb-multiarch (the package gdb64 will work as well, but is considered obsolete).

I cannot get GEF setup!!

GEF will work on any GDB 7.7+ compiled with Python support. You can view that commands that failed to load using gef missing, but this will not affect GEF generally.

If you experience problems setting it up on your host, first go to the IRC channel freenode##gef for that. You will find great people there willing to help.

Note that the GitHub issue section is to be used to report bugs and GEF issues (like unexpected crash, improper error handling, weird edge case, etc.), not a place to ask for help.

But fear not, GDB 7.7 corresponds to the latest packaged version of Ubuntu 14.04. Any version higher or equal will work just fine. So you might actually only need to run apt install gdb to get the full-force of GEF.

I get a SegFault when starting GDB with GEF

A long standing bug in the readline library can make gef crash GDB when displaying certain characters (SOH/ETX). As a result, this would SIGSEGV GDB as gef is loading, a bit like this:

If so, this can be fixed easily by setting the gef.readline_compat variable to True in the ~/.gef.rc file. Something like this:

You can now use all features of gef even on versions of GDB compiled against old readline library.

Does GEF prevent the use of other GDB plugins?

Definitely not! You can use any other GDB plugin on top of it for an even better debugging experience.

Some interesting plugins highly recommended too: 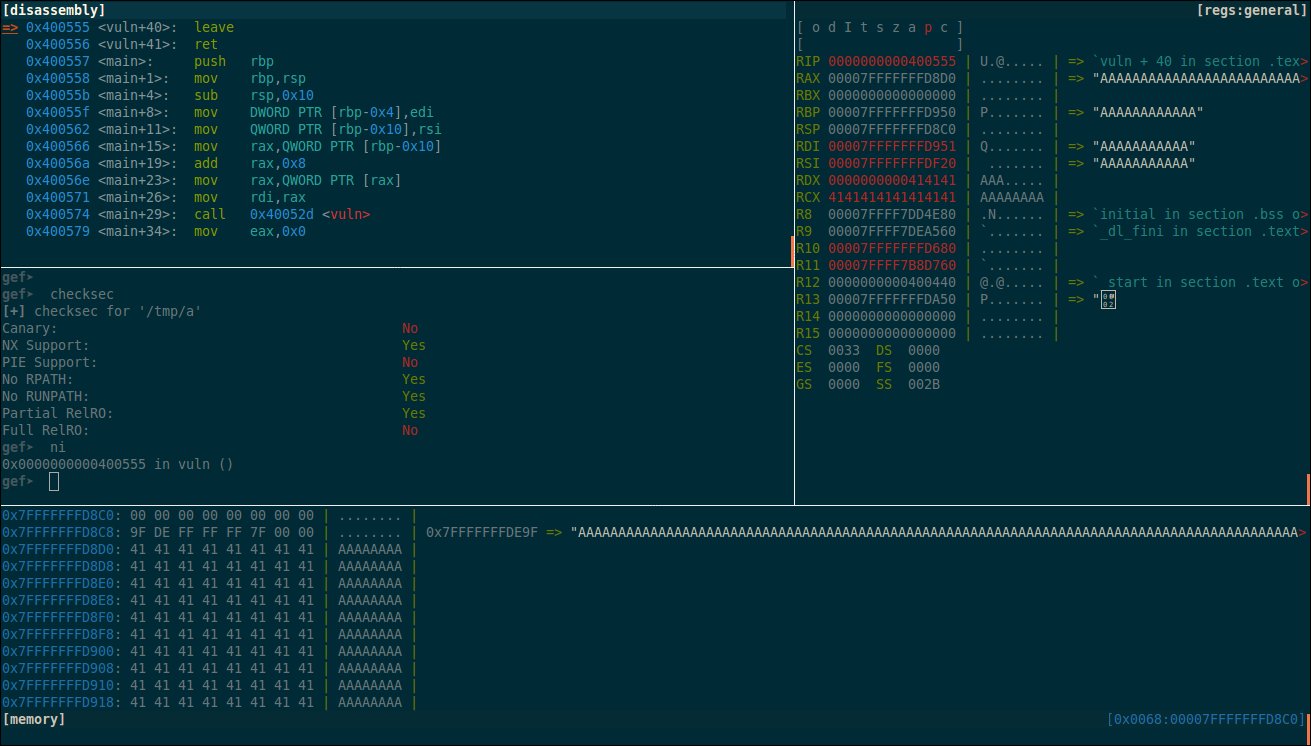 GEF says missing modules, but I'm sure I've installed them, what's up with that?

To verify this, you can simply start GDB with GEF, which will show you the Python version currently supported by your GDB, or run the command:

It immediately shows that GDB was compiled for Python3. You have to install the modules (such as capstone, keystone, etc.) for this version and it will work, guaranteed.

And if this does not work, it is simply that the modules was not installed properly. To avoid incorrect behavior, if importing the Python module fails, GEF will simply discard altogether the command that uses it, and it will be shown when running the gef missing command.

To see the proper stacktrace, simply open a Python interpreter and try importing the module. This will show you an error.

This is not an error or bug in GEF. As a matter of fact, GEF doesn't need any of those external modules to run. However, the quickest way to solve this issue would be simply to run the update-trinity script, which will download, compile and install the latest versions of capstone, keystone and unicorn, allowing also other modules relying on them (such as ropper) to run smoothly.

I want to contribute, where should I head first?

I would suggest thoroughly reading this documentation, just having a look to the CONTRIBUTE file of the project to give you pointers.

Also a good thing would be to join the ##gef IRC channel on Freenode to get in touch with the people involved/using it.

I think I've found a bug, how can I help fixing it?

gef is only getting better through people (like you!) using it, but most importantly reporting unexpected behavior.

In most locations, Python exceptions will be properly intercepted. If not, gef wraps all commands with a generic exception handler, to disturb as little as possible your debugging session. If it happens, you'll only get to see a message like this:

By switching to debug mode, gef will give much more information: If you think fixing it is in your skills, then send a Pull Request with your patched version, explaining your bug, and what was your solution for it.

Otherwise, you can open an issue, give a thorough description of your bug and copy/paste the content from above. This will greatly help for solving the issue.

I get weird issues/characters using GDB + Python3, what's up?

Chances are you are not using UTF-8. Python3 is highly relying on UTF-8 to display correctly characters of any alphabet and also some cool emojis. When GDB is compiled with Python3, GEF will assume that your current charset is UTF-8 (for instance, en_US.UTF-8). Use your $LANG environment variable to tweak this setting.

In addition, some unexpected results were observed when your local is not set to English. If you aren't sure, simply run gdb like this:

This issue is NOT GEF related, but GDB's, or more precisely some versions of GDB packaged with Debian/Kali for ARM

gdb version 7.12, as distributed w/ Raspbian/Kali rolling (only distro's tested,) throws an exception while disassembling ARM binaries when using gef. This is not a gef problem, this is a gdb problem. gef is just the tool that revealed the gdb dain bramage! (The issue was not observed using vanilla gdb/peda/pwndbg) This issue was first noted when using si to step through a simple ARM assembly program (noted above) when instead of exiting cleanly, gdb's disassembly failed with a SIGABRT and threw an exception:

This turns out to be a known problem (regression) with gdb, and affects gef users running the ARM platform (Raspberry Pi).

The mitigation is for ARM users to compile gdb from source and run the latest version, 8.1 as of this writing.

Do not file an issue, again it is NOT a bug from GEF, or neither from GDB Python API. Therefore, there is nothing GEF's developers can do about that. The correct solution as mentioned above is to recompile your GDB with a newer (better) version.

The whole topic was already internally discussed, so please refer to the issue #206 for the whole story.